We got to catch the U.S. premiere of “Hooked” back in June in NYC, a film written and directed by Max Emerson – yes, “the” Max Emerson, the world-traveling influencer behind @maxisms, with 750,000+ Instagram followers and climbing – and screened as part of NewFest, New York’s LGBT Film Festival.

But the story of “Hooked” isn’t about Max; it’s about a serious, moving message delivered by a film that exceeded my expectations.

“Hooked” tells the story of a teen couple, Tom and Jack, who run away and start living on the streets. To make much-needed money, Jack, ever-impulsive, turns to “escort” work and becomes involved with a closeted married man. The narrative about LGBT homeless youth may not be new, but the way in which it was portrayed by the two leading actors (both straight) delivered a very serious message: We cannot afford to lose another potential LGBT leader to violence, sex work or, worse, death. 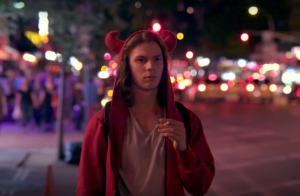 After the screening, Max said something during the Q&A session that made me pause and reflect. While doing research for the film, he said the kids he interviewed while doing research for the film never portrayed themselves as victims. In fact, Max said he’s met more millionaires who act like victims than these kids. This gives me hope for our future generation’s resilience and ability to make their mark on the world, even if it’s just to be a better person.

It’s estimated that 2 in 5 homeless youth in America identify as LGBTQ. With today’s political environment causing more turmoil and division, we as a community need to be part of the solution and not be complacent about it. I choose not to be a victim of any circumstance I face, and I will become more involved with helping solve the issue of LGBT homelessness.