Trending
Social Media Icons
You are at:Home»Gay»Will & Grace & Jack & Karen are back indeed!!!!

It’s been a decade and change since we said goodbye to Will, Grace (and their flash-forward college-age offspring) and Jack and Karen. But now, after months of anticipation and teasing, Will & Grace returned to NBC’s Thursday night lineup last nite with a reboot fit for a queen.
Last night’s premiere wasted no time letting us know we’d jumped to the present day, as the quirky quartet had replaced their traditional paper-based game of “Celebrity” with Ellen DeGeneres’ “Heads Up!” app, forcing them to guess the identities of modern-day notables like Caitlyn Jenner, Jada Pinkett Smith, Newt Gingrich and Melania You-Know-Who. 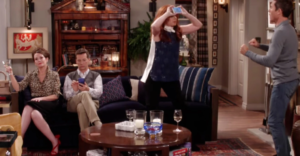 To explain the backpedaling from the finale, Karen awakens from a martini-induced “daydream” and helps the audience orient around the new reality. After she learns who won the election – good news to her, of course – the group updates her, and us, on some of our most pressing questions. Yes, she’s still rich. Yes, Stan’s alive. No, Will and Grace don’t have kids. Yes, they’re single. And, yes, “Will & Grace” is still hilarious, with quick, witty, LOL banter and one-liners that had us smiling from ear to ear.

Creators Max Mutchnick and David Kohan seamlessly take the four main characters to the White House, where Will giggles like a schoolgirl as he flirts in the Rose Garden with a hot Republican Congressman played by Eddie Matos (of Port Charles fame),

while Grace is in the Oval Office fidgeting through the president’s desk for redecoration inspiration. Jack, updating a hot Secret Service officer on what he’s been up to over the past few years, lets us know of his various entrepreneurial eponymous endeavors, while Karen’s … Karen. Thank goodness. 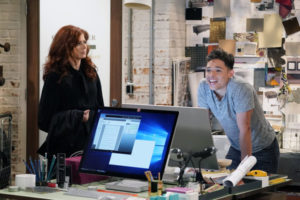 This episode scratched our itch. Not only did we get up to speed on what’s been going on with these folks over the past decade, but we did so quickly enough to get back into the laughs that made us fall in love with the series in the first place. The plot line in the White House – while a bit kooky – lent a political relevance that honored the present place and time, and the fight and reconciliation between Will and Grace reminded us the strong binds that makeshift families can hold.

The reboot is off to a promising start, and we can’t wait for next Thursday. Welcome back, Will & Grace!

Rating: 5 out of 5 Dirty Martinis