Yes, the title thru me for a curve at first as well, but it is a brave and forward witty double entendre for a new musical written by Jack Turner. The G Life had the pleasure of speaking with the playwright and lyricist recently to learn more about this exciting new musical.

“Just love yourself; the rest will fall in place” is also the tag line to the title of this production. It’s an ambitious piece that we think is really past due. Not only does it finally feature gay men as the lead characters, and yes, the message is there for self-acceptance and self-love for gay youth, but the message is also intended for bullies, parents and friends.

On top of all that, LUBE casts an even wider net to bring attention to the giant problem at hand which is gay teen suicide. This show not only tackles the issue straight on, but somehow does it through music, heart, comedy, and tears. It doesn’t stop there. LUBE reaches even further by not flinching away from gay sex. Don’t worry, there are no sex scenes in the play, but the topic of gay sex is addressed with humor. In fact, LUBE celebrates its existence, making it finally something that’s OK to talk about, not something to be shunned like it is in most or all other productions.

When the elephant in the room that’s never discussed happens to be gay sex, there’s a great danger of sending the wrong message, of telling young gay people that gay sex is dark, taboo, or forbidden, that these feelings and attractions that they feel are fundamentally wrong!! That they, as human beings, are somehow flawed. Jack feels that dealing frankly with every experience that a young gay man or woman deals with while growing up, including sex, is a necessary first step towards self-acceptance, and we could not agree with him more.

It’s time for a Broadway-style musical to have gay lead characters with normal coming of age questions being addressed and discussed through music and comedy as well as respect. Being gay is OK. LUBE provides positive role models that deal with changing attitudes and acceptance – and as Jack likes to say – especially self-acceptance. 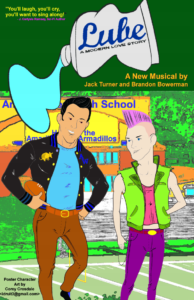 According to The Trevor Project (http://www.thetrevorproject.org/pages/facts-about-suicide), suicide is the second leading cause of death for young adults ages 10-24, and if gay, they are four times as likely to attempt self-harm!!! Why aren’t we as a community doing more? This musical that promotes self-love is not only here to entertain and make us think, it’s here to save lives. We think this Musical needs to be heard, promoted, and celebrated!
Just like the theme song says, “LUBE, or self-acceptance, really is the way to Nirvana!”

If you want to do your part and help this production get to the Great White Way where it can provide hope and inspiration to not just the gay kids, but even to the bullies and their peers and parents, follow them on Facebook: http://www.facebook.com/LubeMusical.

You can also donate to help promote the show, record the music, and create a web series based on the musical:https://www.gofundme.com/r5w8z5wd5w.

There’s also a video of Scene 6 from the musical, along with three music videos, on their YouTube channel:https://www.youtube.com/channel/UC2u8JosSNSEi1rrGgL6NqNw.

And you can get even more information on this inspired musical on the LUBE Musical web site: http://lubemusical.com/.