Trending
Social Media Icons
You are at:Home»Gay»The Men of “Afterglow” bare all…

Can open relationships work? Ask your fellow G Men, and watch the heated opinions fly. “Yes, they’re the only way to go!” “They can work, if there are rules.” “Maybe for some guys, but not for me.” “No.”

Afterglow, a sexy and provocative play now enjoying an extended run at the Davenport Theatre through March 18, explores the dynamics of an open relationship with honest dialogue and full-frontal storytelling. Inspired by the real-life experiences of playwright/director S. Asher Gelman, Afterglow introduces us to an outwardly enviable married couple, Josh and Alex, who “climax” with a young man named Darius. Their encounter tests the limits of polyamory when Josh’s feelings for Darius deepen, a poorly timed development given that the husbands have a baby on the way. What ensues is a fascinating character study of how three personality archetypes – the emotional one (Josh), the logical one (Alex), and the physical one (Darius) – navigate tumultuous, unchartered relationship waters.

We had the pleasure of catching Afterglow recently and spoke with Gelman, as well as cast member Brandon Haagenson (Josh), about what Afterglow has to say about modern relationships, gay and straight alike.

“This is not a uniquely gay story,” Gelman tells us. “It’s told with three men because that’s how it happened for me. … But I didn’t want to rehash so many of the common tropes in gay theatre, or gay stories in general. Nobody is dealing with HIV/AIDS, nobody is coming out of the closet, nobody is getting gay-bashed. I wanted this to be in a post-gay world.”

Although the events that inspired Afterglow went down in Tel Aviv, the show is set in New York City – a place that’s as “post-gay” as perhaps anywhere in America. The show uses its setting to explore how transplants to the city are intoxicated by the possibility of unlimited better options. There’s always a better job, a better apartment, a better lover.

“We all move to New York because we believe we can compete with the stiffest competition in the world,” Gelman says. “We all believe we can succeed, otherwise we wouldn’t be here. So New York was a perfect place to tell this story, in that it is a place of extremes. People here are hard workers and big dreamers, and not all of those dreams pan out.”

Perhaps the most complex of the three characters is Josh, the artist who’s most intimately experiencing the rips and rubs of this 21st century arrangement. Haagenson has portrayed Josh since Afterglow opened during Pride last year – 250 performances and counting, through two Alexes and three Dariuses.

“He’s a romantic,” Haagenson describes Josh. “He definitely likes to walk in the clouds, but he’s also certain he can get up to the clouds. He shoots for the stars, but often gets what he wants, not because he thinks he deserves it, but because things work out for him. He’s like a cat who always lands on his feet.” 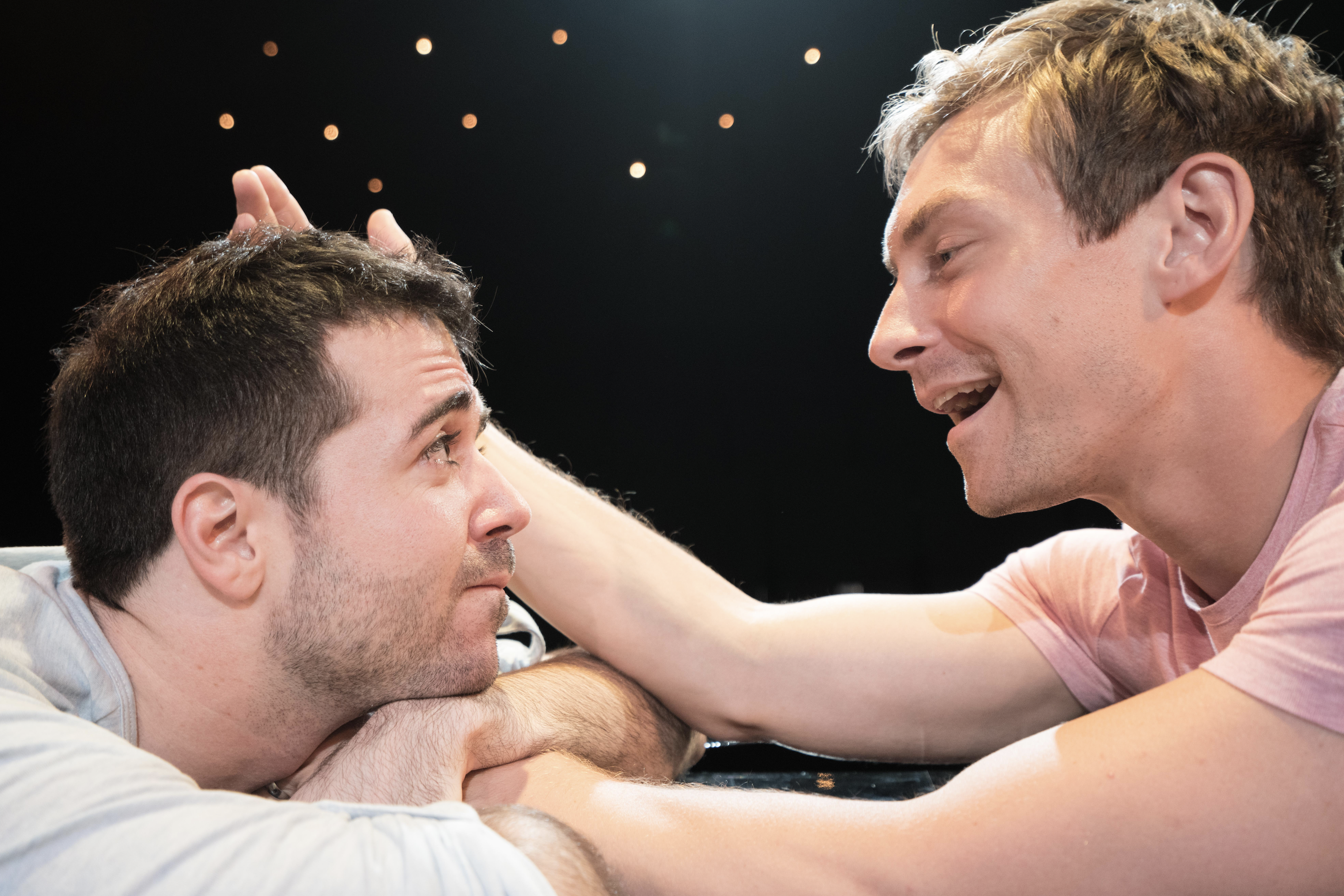 Embodying Josh and telling this story has, as one might expect, shaped Haagenson’s personal views of open relationships a bit. Rules have an important role to play, but they shouldn’t be written in stone.

“The couples I know who have open relationships I admire are the ones who set rules, and they have clear boundaries, like no repeats, no sleepovers, no unprotected sex,” Haagenson explains. “Doing the show, I realized that other rules pop up, that things change, and you realize that when the relationship you have with a third person is so ever-changing, the other person in the relationship starts to second-guess the rules. When you have an open relationship and have boundaries, you have to accept that those boundaries shift. They’re like plates in the earth; you’ll have earthquakes, and maybe this rule doesn’t matter as much, or maybe this rule is getting in the way. You have to be willing to throw old rules in the fire.”

Gelman, by the way, is still married to Mati, the man with whom he endured the bumps that inspired him to write Afterglow. Mati even shot the promotional images for Afterglow. And they still have a non-monogamous relationship. Gelman say his play isn’t so much a warning about open relationships, but a warning about the consequences of communication breakdowns. Whatever your opinion about polyamory, Gelman says he hopes Afterglow, at the very least, prompts a discussion that strong couples shouldn’t feel threatened to have. 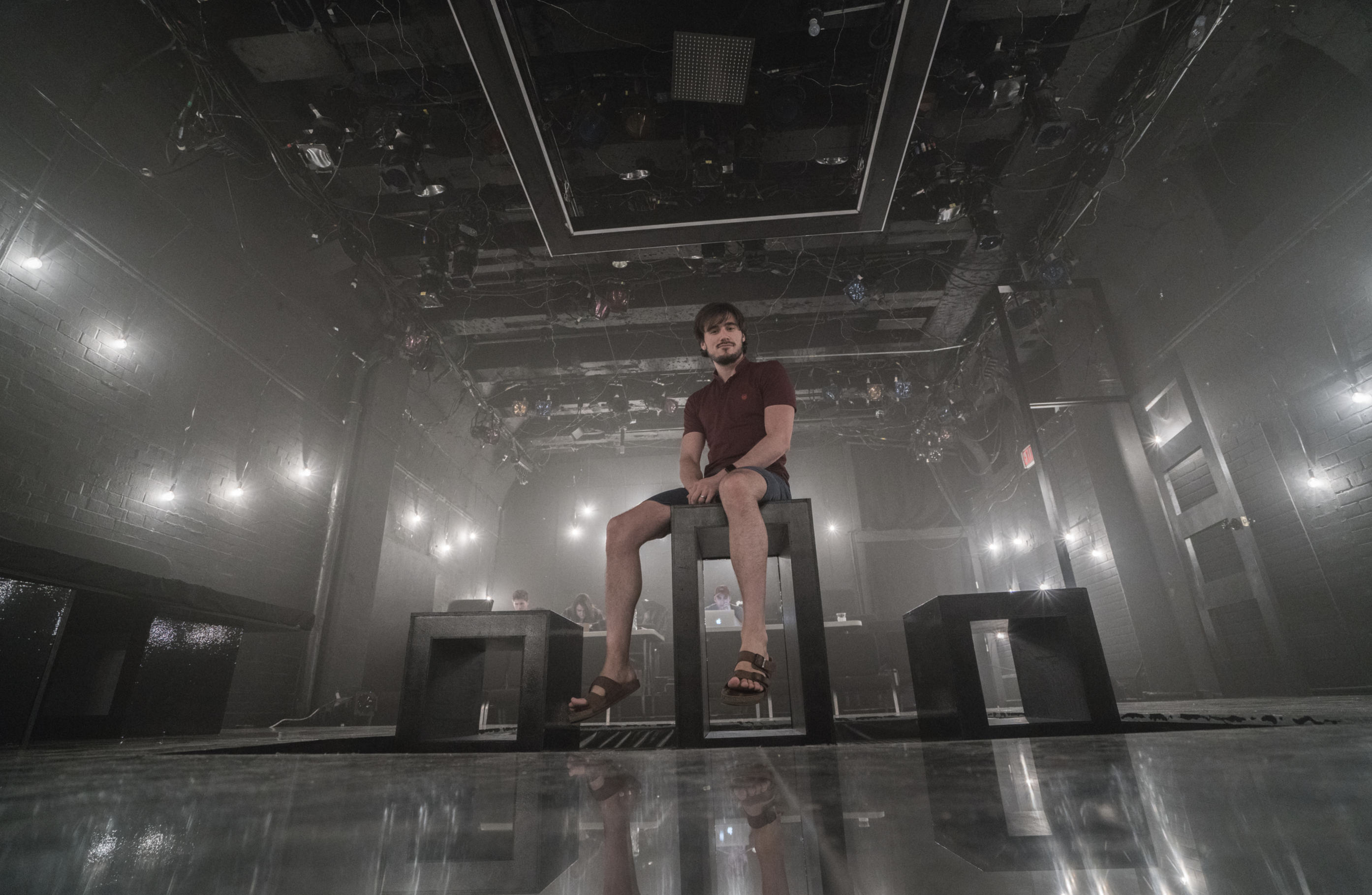 “I know a lot of people who have refused to bring their partners to the show for fear of it opening up a conversation,” says Gelman. “To me, that’s all the more reason to come see the show. If your relationship can’t survive that conversation, is it worth being together at all?”

Haagenson says he hopes audiences leave the theatre with a newfound respect for honesty.

“You need to be completely upfront and honest about what you need from people, and what you plan to give them,” Haagenson says. “My character likes to tell half the truth and think it’s not a lie. But half the truth is not the truth. A white lie might get you through today, but honesty is the only thing that will get you through a relationship.”

All photography by: Mati Gelman